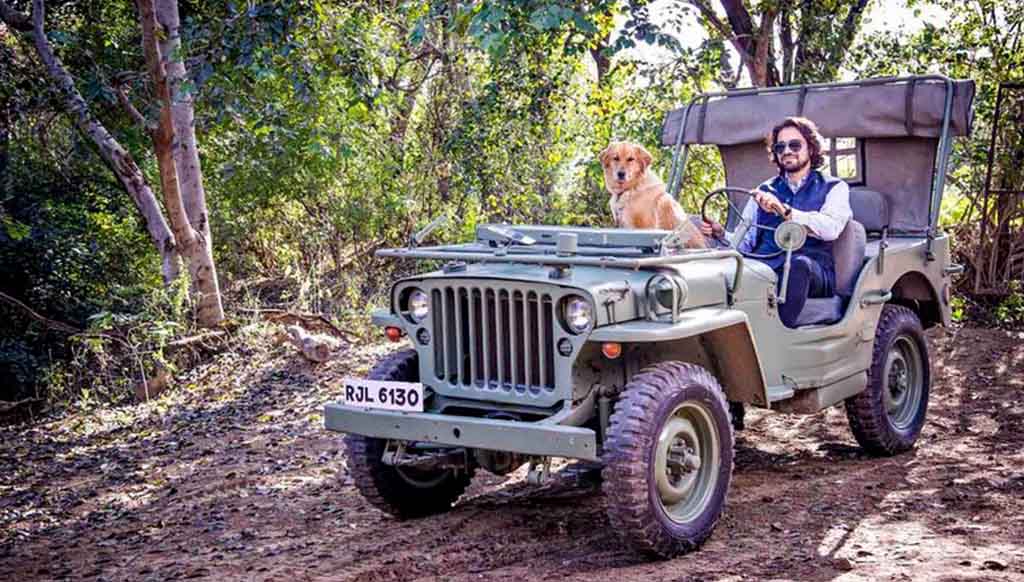 Siddharth Kasliwal, son of the trendsetting Munnu Kasliwal, is the ninth generation co-owner and counted among the 50 most eligible bachelors in the world (Photo Credits: Manpreet)
Love

If you’re looking for some exquisite jewelry, Jaipur is the place to go to. And once you’re there, head straight to Gem Palace. This is where you find everything from history-laden jewels dating back to the Mughal Era, to contemporary Indian jewelry with modern aesthetics. From poison rings, sindoor boxes, ruby cuffs and jeweled chess sets—this place has treasures galore. Siddharth Kasliwal, Creative Head of Munnu The Gem Palace, who has been ranked among the 50 most eligible bachelors of the world, speaks to The Luxe Café about their history, their growth and the future of their brand, and how people’s tastes in jewelry are changing from the opulent to the stylish, with vibrant, multicoloured stuff being back in fashion. Here’s an exclusive peak into the preserved and persisting glory of Gem Palace

When it comes to creating fine jewelry, no one can compete with India’s pre-eminent jewelry house, the Gem Palace. Historically Jaipur-based, the Gem Palace has been crafting the most exquisite, stupendously beautiful designs a jeweler could ever make. In fact, this is the place where you can spot some of the finest original pieces dating back to the Mughal Empire still on display, testifying to the timelessness of their work. Some of their few pieces have been featured at the best art institutions in the world like the Metropolitan Museum of Art and the Kremlin Museum.

This family business dates as far back as nine generations and has been the go-to place for jewelry for connoisseurs in India and across the world.

Siddharth Kasliwal, the ninth genration co-owner of the 200 year-old jewlery business, is the son of the late trendsetting jeweler Munnu Kasliwal. 32-year-old Siddharth, who has been mentioned in international magazines as one of the 50 most eligible bachelors in the world, took over the family business as the Creative head of Munnu the Gem Palace after the death of his father in 2012.

Siddharth elaborates to us the history of Gem Palace, which is rich and varied. “The Kasliwal family came to Jaipur in 1728,” he says. “Much of ancient history of The Gem Palace is lost in the mists of time. In that period the Maharaja of Jaipur was building a modern city that he wanted to turn into a centre of excellence. As well as attracting the country’s intelligentsia, he invited the finest artists and craftsmen from all over India to build his now famous pink city. The Kasliwals were then appointed as the Crown Jewelers. Originally, the family operated within the walls of the City Palace but in 1852, when the Maharaja was expanding the city, the Kasliwals moved to some land outside the palace and established the Gem Palace on the site where it remains to the present day on M.I road.”

From the Crown Jewelers to the Maharaja of Rajasthan, Gem Palace grew in fame and stature, until they could boast of being ‘crown jewelers’ to royalty from all over the world. Their star-studded list of patrons includes names like Princess Diana, Nichole Kidman, Gwyneth Paltrow, members of the Kennedy family, Oprah Winfrey, the Arab sheikhs and of course, Indian royalty.

In an era where nearly everything is mechanized, the masterpieces at Gem Palace are crafted with a certain attention to craft and detail. The Jewelery house is synonymous with big, bold baubles and fine objects that reference India’s rich history. Everything you spot is meticulously hand-made by craftsmen at the workshops who have learnt their expertise from their fathers and grandfathers, maintaining traditions and techniques that date back centuries.

To hold a Gem Palace creation is to unfold an entire universe within the palm of your hand. Each turn reveals a new dimension — belts transform into brooches, rings open to unveil loose gems, necklaces flip to display backings as intricate as their facades. Rubies and emeralds nestle into pure gold settings, inlaid with such precision that, on first glance, one assumes they were painted.

Recently, Siddharth Kasliwal also payed homage to his father’s legacy and the brand by unveiling a Sindoor Collection – inspired by a traditional Mughal style Sindoor box made of rubies, designed by his father. A five-piece jewelry, this labor-intensive collection consists of a necklace, ring, earrings, bracelet  and a perfume bottle and has been made using the traditional Indian technique, Kundun, where the rubies are cut paper-thin and then inlaid with gold. The method of making the jewelry is labor intensive and the process very expensive, marking out its exclusivity.

So which among these are their signature pieces? “Our signature pieces are the bird earrings, diamond kundan enamel choker and Ruby cuff, all of which have been exhibited at various museums around the world,” informs Siddharth. What about his personal favorites, which ones according to him are the most stunning? “It is difficult to say as we try to make all our pieces beautiful in their own manner!” he exclaims, and one look inside the Gem Palace would surely make you understand how hard it is to choose a favorite. But then he adds, “To point out a few, the ruby sindoor box, poison ring, Ruby cuffs and a multicolour tourmaline cuff made by my father would be the best ones.”

Some of the jeweled baubles present at Gem Palace even date all the way back to the Maharajas’ time. “We have a good chess set, a parakeet drinking flask and few turban pins,” points out Siddharth when you question him about pieces crafted for royalty in the earlier days of Gem Palace’s existence.

Siddharth was 21 when he joined the family business, but he was introduced to the world of jewels at a pretty early age by his father. “I grew up seeing the egg-sized stones, the beautiful uncut Colombian emeralds and rubies from Mozambique. During my summer vacations, he would take me to Brazil to visit mines,” he recounts. “At the age of 20, I accompanied him to New York, where he was creating a special line of jewels for a high-end exhibition at Metropolitan Museum of Art.  During that period, I got a chance to visit a lot of galleries and meet a lot of people for business. All that gave me a lot of exposure to the world of jewels.”

Despite that, it was a challenge for him to carry forth his father’s legacy. “After my father’s demise, I went through all sorts of emotions. It was a challenging time for me. There was a struggle in business to take decisions and to take responsibility of the business. Stepping into my father’s shoes meant dealing with people who had looked up to my father. But one beautiful thing that happened to me was that I was introduced to the business by my father at a very young age and everyone who dealt with him accepted me in no time.”

But his learning curve has been steep and the work quite demanding. “Handling the business has not been easy because you deal with clients who require customized work,” he explains. “You need to give a personalized touch when it comes to dealing with them. Also, being an elder son, you have to shoulder many responsibilities and are expected to do a lot of things. This could also be showing up for all the events in my craftsmen’s lives, whether it is a child’s naming ceremony or a wedding, it is important to attend all. Their families have served us for generations and they are a very important part of our company.”

Handling all the challenges, Siddharth has done a pretty good job of carrying the legacy forward, meticulously focusing on his clients’ requirements. “When people are traveling to India they come from all places,” he explains. “With our jewelry they are particularly looking for designs that are traditional but contemporary. Designs that are timeless and ageless, like our Mughal contemporary collection.”

But he also observes a shift in tastes from opulence to minimalism. “People have started moving to art deco, minimalist designs like a simple long chain. While 5 years ago people used to go for heavy stuff from big kundans to big stones. At Gem Palace, we now see people moving to modern stylish designs but they still prefer quality over quantity. In fact, a lot of Americans go for lighter, modern designs and are not so much concerned about matching jewelery with the outfit. They are rather concerned about the value of the jewelry.” That is why, he says, what they are doing now is to “modernize Indian jewelry”, create pieces that you can wear every day and everywhere, and they always look stunning. Stone beads, he says, have grown rapidly in popularity, while “modern and vibrant multi colored stuff is back in fashion.”

The designing of all these modern day creations is a joint effort, according to Siddharth. Designing is done by all and everybody puts things together, he says. “Earlier my father Late Munnu Kasliwal used to be the chief designer for the company and after him I have stepped into the position.”

As for the future, he has major expansion plans for the brand, with his vision set clearly on the summit. “We launched stores in Mumbai and Raas Haveli in Jodhpur after my father’s demise.   We also have various exhibitions planned in many national museums in the years to come, can’t name it yet. Hopefully, we are looking to expand in cities like Calcutta, Chennai and also open stores in Japan and Hong Kong in the next 3 years.”

And that should pretty much quell our curiosity about all things Gem Palace, but we still need to ask him our signature question. So what does luxury mean to the Kasliwals?

“Luxury means happiness. Ability to do things that you love and love what you do. That’s the biggest luxury and we all are creating the pieces and continuing the craftsmanship that was done centuries ago.” And so while they’re creating luxury for others to savour, to the Kasliwals, the creation of these masterpieces is luxury itself. That’s what we call a labour of love.

Royal style diaries for the princess in you

Indulge your sweet tooth in style