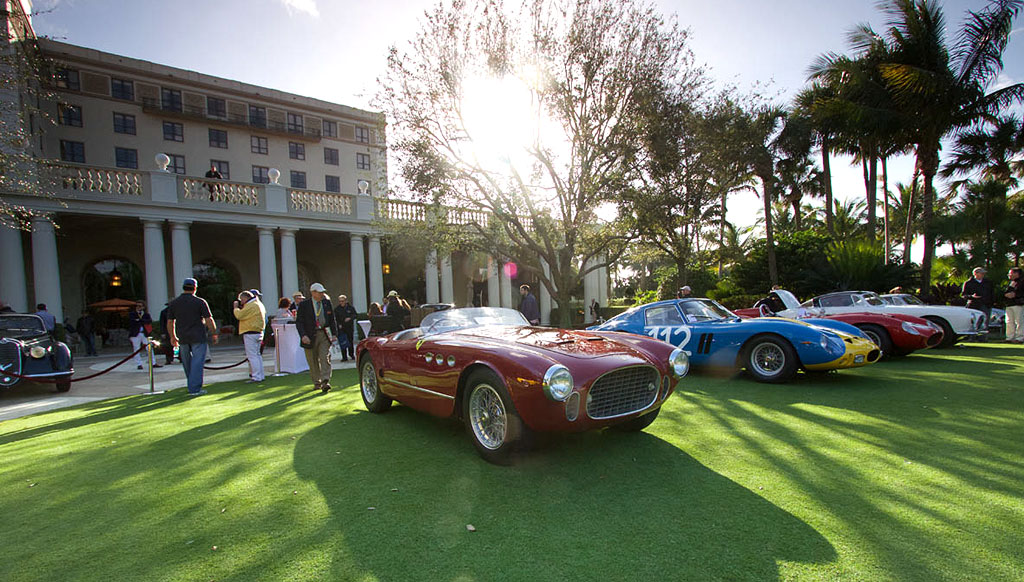 FERRARI FLOURISH | A bevy of classic beauties descended upon Florida, with their collectors and restorers in tow
Love

Acclaimed and sought-after automobile photographer Günther Raupp details the celebration of the 25th Cavallino Classic at the Palm Beach, complete with the vagaries of the weather and beauty pageants involving the world’s most
jaw-dropping Ferraris

What better than to take the one of its kind classy Ferrari on a tour in the middle of the winter? It all makes perfect sense, especially with the winters reveling a clear blue sky and temperature about 25 degrees, in a neighborhood full of palm trees, when the charm of Florida attracts you, and the destination is “Cavallino Classic” event.  Organizer John W. Barnes released the ‘motto of the meeting’ at the “Join us for a winter party”, which he hosted the 25th time at the Palm Beach. The experts count it among the five most important events on classic cars worldwide.

Around 500 vehicles with the famous trademark Prancing Horse (Cavallino Rampante) came together from all over the United States. The fact that they did not come alone from such distant corners as far as Seattle/Washington speaks for itself. The restorers, who otherwise take care of the outrageously expensive collections of the collectors, transport these with their double-decker trailers. The owners of the precious collection(s) then fly – some with their own jet – into the Palm Beach.

“Our trucks took four days from Puyallup/Washington in the Northwestern Unites States to reach this far. The boys got stuck in the snow for the first time in Midwest”, says Butch Dennison, one of the greatest in the field of restoration in America. Later, as if any further indication of the climatic privileges were needed in the ‘sunshine’ State of Florida, the breakfast televisions were simultaneous fluttering with the images of snow disaster in New York. The ‘Cavallino Classic’ course was naturally optimized in 25 years. Part of the event’s concept is a top event, the ‘Monterey Car Week’, quite similar to the Pebble Beach contest in California. In both the cases, a beauty contest builds up to the culmination. On Thursday evening a party was hosted in the hangars of the close-by airport, while a nearby racetrack lets one spur the horses. The crucial difference: here it is much informal and casual; here, all, every single thing is devoted to Ferrari.

On Friday, however, the weather gods punished the ferraristas: It was pelting down with rain! The race course of Moroso, which is proudly called the “Palm Beach International Raceway”, has retained the charm and the security level of an old club circuit. With the racers under covers and in the absence of howling noise of engines, there was quite a melancholic impression in the rain.  All the more spectacular was when someone with his million dollar Ferrari ventured onto the slopes under these conditions – ultimately dismantling! It wasn’t just any Ferrari, rather a 290 MM driven by racing driver Eugenio Castellotti at 1956 Mille Miglia. The owner, though unhurt, lost all desires for Cavallino and was not seen again.

The participants and visitors enjoyed the “Concours d’Elegance” on Saturday on the Golf-Parkour before the swanky hotel – The Breaker. The enthusiasts from the old Europe perhaps will always remain a mystery in such beauty contests with all its rituals and featuring American invention. Although similar competitions feature at European events, its charm here has a completely different dimension. The former star of the Gran Turismo, the warhorses from Le Mans or Indianapolis act as the ‘bread-and-butter-Ferrari’ from impact of a 308 GTB jurors in umpteen different classes. They use a sophisticated rating system to choose the best. And then, they coronate two “Best of Show” with crowns. John Barnes knew what he was guilty for: ​​He invited the last 24 ‘Best of Show’ winners once again. And eventually, 22 came. The highlights consisted the 375 Speciale of 1955, first owner Giovanni Agnelli (†81 – means died in 1981?), the 375 MM Pinin Farina Coupe Speciale from 1955, the 250 GT PF Cabriolet Speciale 1960, and 250 Europa GT from 1954 built by Vignale. And, and, and… Absolutely intoxicating amounts of rare, really exceptional classic Ferrari were assembled here! How was that possible? Only here in America, private individuals have adequate resources which they can spend on the acquisition and restoration of these vehicles. In certain social class it is vogue to own such expensive ‘Collector Cars’. This is confirmed by celebrities like Dana Mecum (“Best of Show” at the race cars with a 250 Monza) and Lee Herrington (“Best of Show” in the GT category with a 400 SA Superfast II). At the closing ceremony on Sunday it was obvious that Ferrari isn’t the only Playmobil. “The Sports Car Sunday at Mar-a-Lago” was a “Multi-brand Contest”. Hispano Suiza, Packard, Bugatti, Porsche, Rolls Royce, Mercedes, McLaren, Studebaker – to name a few – were among the impressive portfolio of precious brands and vehicles. This was organized here at the private golf club of a billionaire. The “featured brand”, as it is called, this year was Alfa Romeo. Does one know it all? Certainly not! What the brand from Milan presented here were simply the High-End, the icons of Alfa Romeo history. Pre-war racing cars and -Gran Turismo stood as a TZ2 in 60’s and Tipo 33 did for the Italian moments in automobile’s heaven. Here the world is still in order, everything is just right: Had the host invested a few more dollars in extra sunshine and blue sky, soft classical music, one or another glass of champagne, a fantasy stimulating pool, the best cars, and Fashion straight from the ramp… It now becomes evident what “sledding” in the winter in Florida means.