The man with the Indian Accent! 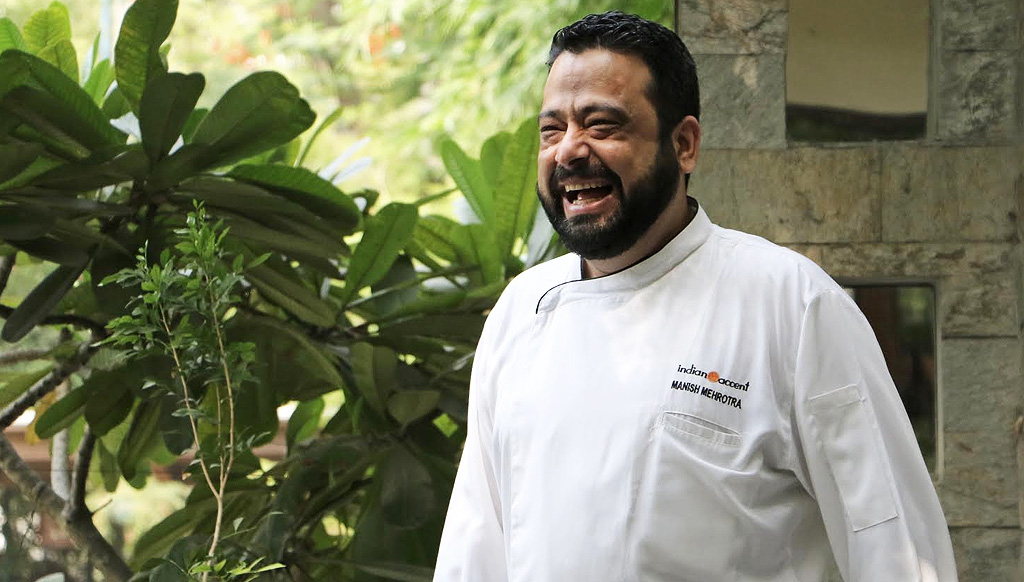 A SIGN OF THE TIMES | Chef Manish Mehrotra’s signature dishes are now going abroad, carrying with them the best flavours from all across India! . Photo courtesy: Sajeev Kumarapuram
Love

By the time he would have opened you up with his wisecracks and loud guffaws, the man behind one of India’s best fine dining experiences, Manish Mehrotra, would have given himself away

“I am not here to do charity,” says the chef, arguably one of India’s finest right now. “Food comes from my head and not my heart.”

Tucked away in an unremarkable bungalow in New Friend’s Colony in the Capital, Indian Accent is where Mehrotra churns out some of his most thrilling concoctions, albeit with a touch of his much-applauded twist.

“It’s about starting a movement,” he says. “I want to change stereotypes about Indians and what they eat. Indian food is just not chicken tikka. People from the North East don’t always eat insects. It’s not that Biharis don’t get to eat at all.”

Perched on a green sofa at the Manor, the hotel that houses the restaurant, Mehrotra talks ardently about his business plans. “Delhi cannot afford another Indian Accent. One is enough. It’s time to move somewhere else, to New York,” he says.

The chef, who hails from Bihar, has rustled up a loyal fan base here. Food-search apps such as Zomato and Tripadvisor are rife with rave reviews of Indian Accent that is run by Old World Hospitality, a group that operates other establishments as well, including the poignant India Habitat Centre.

Globally, Indian food has acquired the tag of a cheap greasy takeaway. We need to remove that with a great glass of wine,” says Mehrotra.

He says his cuisine is ordinary Indian food with a modern soul. “It has solid Indian integrity,” he says. “Just imagine, 20 years ago European chefs start using foam and it becomes the in thing. Here, we have been using milk foam for centuries. What is Daulatki Chaat from Allahabad? It’s milk foam.

A quick scan of Mehrotra’s menu makes you take a jog down your favourite memory lane. The first item on his vegetarian starters is atta and semolina puchkas, Calcutta jhal potato, five waters. Ask any Calcutta-bred Bengali worth his puchkas and aloo kabli about it and you will know what Mehrotra is trying to rouse here. Then comes tandoori bacon prawns and wasabi malai cream! Need we say more?

India is a poor country. But Indians are rich,” says Mehrotra and breaks into a hearty laugh. His food might have all the traces of cross-border diplomacy but, thankfully, the man shows no sign of it.

The conversation veers towards international destination weddings and Mehrotra recounts quite a few Indian ones that had the hosts pushing the envelope. “There was one by a Jain diamond merchant. Despite the limitations of Jain food, the molecular gastronomy on display was spectacular,” he says.The wedding market has changed, according to Mehrotra. “Street food is big these days. From Kulchewalas from Amritsar to panwallas from Benaras, street vendors are flown down to all parts of the world,” says the man, who has been a part of a quite a few lavish destination weddings.

“Cooking is the only form of art that can satisfy all your senses, taste, smell, heart, mind. Horses from MF Hussain can only touch your mind.”

Mehrotra gives his team enormous credit for the success Indian Accent has notched up. “I can’t cook good food and sell it alone. You can prepare the best dish in the world but imagine a scenario where the person serving it at the table messes it up with bad behaviour. Your efforts will go up in smoke,” he says.

The award-winning chef is all praise for his family. His wife Vindhya, who is a chef too, is from South India. They have an eight-year-old daughter Adah. When asked whether he enjoys cooking at home too, Mehrotra shakes up the quaint room with a booming one liner. “Any chef who says he cooks at home is probably lying,” he says.