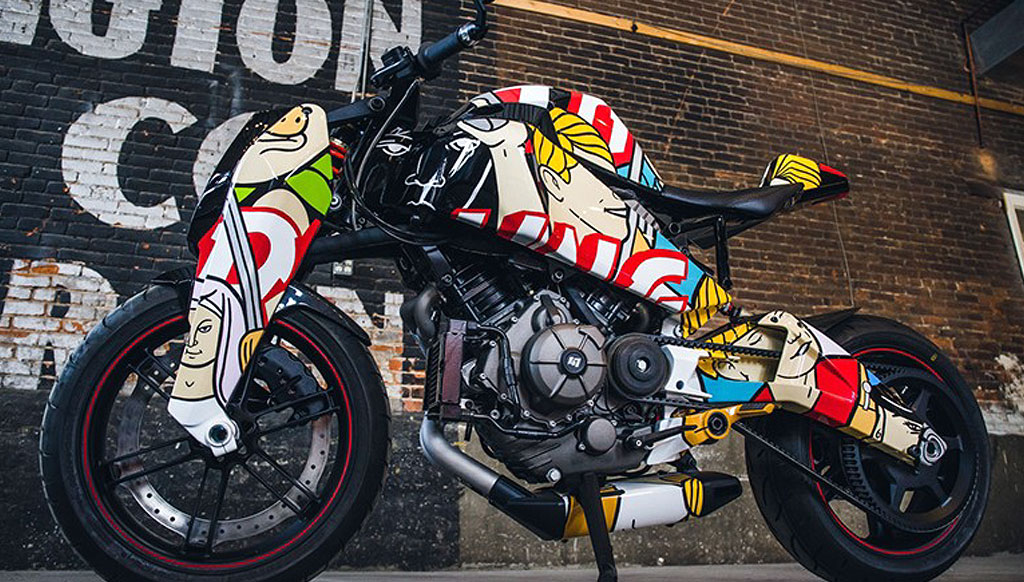 LURED BY LORE | These four gallery-perfect bespoke bikes, each with a design reflecting Japanese Lore, are the final part of a series of 47 Japanese-themed machines
Love

Masters in mechanical deisgn, Ronin Art Motorcycles design these gloriously eye-catching bikes that each carry a legend with them

This collection of jaw-dropping, avant-garde art-on-wheels comes from the stables of Ronin Art Motorcycles, masters in mechanical design.  These bespoke bikes are part of a series of 47 imaginative machines inspired by Japanese lore. The amount selected for the limited production matches the number of Ronin (samurai warriors without a leader) who, based on an 18th-century account, reportedly roamed the countryside seeking revenge for their dead master. The Colorado manufacturer’s own moniker, Ronin Motor Works, was selected for the fact that its bikes are based on the distinctive Harley-Davidson Buell 1125—a model that no longer exists in production.

The 130 hp road warriors feature a high-performance Rotax engine, more than 50 CNC-machined components, TIG-welded tubular subframes, 11 aluminum castings, and a custom monoshock linkage suspension system. Additional enhancements include a front-mounted radiator, new ram air-intakes, a high-flow exhaust system, and cutting-edge electronics. But the engineering is not all that is exquisite. For the final four examples the company commissioned local artists from Denver to design the bikes as one-off representations of their respective oeuvres. The results are as remarkable as each namesake samurai’s acts of valor.

Artist Jason Thielke meticulously decorated the motorcycle Horibe Kanamaru, named for the 78-year-old samurai nobleman whose strength allegedly never waned. To derive the desired graphic effect, Thielke hand-masked each line, used acid to etch patterns into the raw aluminum, and created contrasting shapes through the use of various blasting mediums. The common thread to his collective work is the struggle between self-control and self-gratification—a battle intrinsic to every mindful mercenary.

With a style reminiscent of Roy Lichtenstein’s pop art from the 1960s, muralist Scot Lefavor fashioned the bike Sugeno Harufusa with superimposed elements of his existing painting entitled More Thrilling Adventures with Firearms. The comic-page pastiche includes a family packing firepower, Porky Pig, an armed nun, and a baby smoking a joint while swilling whiskey—a dysfunctional dystopia apropos to the motorcycle’s eponymous Samurai. According to legend, Harufusa’s mother committed suicide to free him from attachments.

Named Nakamura Masatoki, the third motorcycle in the series is also dressed in the superimposed art of Scot Lefavor. The fragments featured are from a scathing commentary on materialism and greed that he created in 2008, the year of the global financial crisis that crippled the housing market in the United States. Included in the original piece are: a lyric from the hip-hop group Wu Tang Clan; an equestrian woman, riding a rat clutching a diamond; and a sleazy lounge lizard inviting the viewer to party. The cryptic collage would be easily deciphered by samurai Masatoki as he was renowned for his perception and detection.

The bike Teraoka Nobuyuki highlights traditional Japanese illustration often found in full-body tattoo work. The hand-painted scene by Samuel Lee Turner presents samurai Nobuyuki, the lone survivor in the iconic tale of revenge who, according to legend, was tasked with protecting the spirits of his fallen comrades. The left flank of the vehicle shows him attacking the enemy with a war hammer while the right side portrays his deceased band of brothers as Tengu mountain creatures—a striking tableau to match Ronin’s other worldly design.